BUY ONE GET ONE FREE on all SoccerSuckersTM at WHSmith* 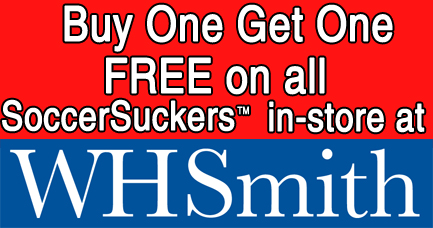 World-class football freestyler Dan Magness, whose feats include, holding the Guinness World Record for longest distance walked while doing keepie-uppys, has teamed up with Soccer Suckers™ to share his five top skills in a video for budding tricksters to learn.

Get Your FREE Special Edition SoccerSuckers™ From WHSmith With The Daily Star On Saturday 2nd November! 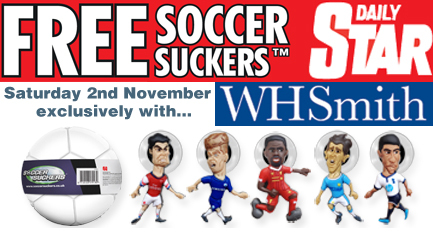 Kick off your SoccerSuckers™ collection

SoccerSuckers™ are the brand new collectable football craze that gives you the chance to collect and build your very own dream teams from the top English football clubs and stick them everywhere!

To launch of the brand new football crazeSoccerSuckers™ we can officially announce the players from each of the five top English football clubs that are available for you to collect and build your dream team.

Do you see yourself as the next Jose Mourinho or are you more like the great Sir Alex Ferguson when it comes to picking a football formation and your players?

Which of Europe's biggest names are still available on free transfers?

Will Paul Pogba return to Juventus? What next for Gareth Bale? And where could Christian Eriksen end up?

Arsenal complete the signing of midfielder Fabio Vieira from Porto in a 40m euro (£34.2m) deal.

Manchester United hope to persuade Denmark midfielder Christian Eriksen to join them before the start of the new season.

Newcastle United are in talks to sign Burnley and England goalkeeper Nick Pope.

Fabio Vieira: What can Gunners fans expect after agreeing deal for Porto midfielder?

Arsenal have agreed a 40m euros (£34.2m) deal for Porto's Fabio Vieira, so how will he fit in and will he hit the ground running?

Manchester United striker Ella Toone explains how being rejected by Manchester City led to her United breakthrough and how she feels going into the Euros as a new face of the England team.

Watch some of Christian Eriksen's best Premier League moments as speculation grows as to who the Denmark playmaker might be playing for next season as he seems set to leave Brentford.

England goalkeeper Sam Johnstone agrees a four-year deal with Crystal Palace and will join the Eagles on a free transfer.

Sign-Up today to receive all the latest SoccerSuckers™ news, signings, games, offers and much more!

One SoccerSucker™ player per football capsule.
Click here to find your nearest retailer.